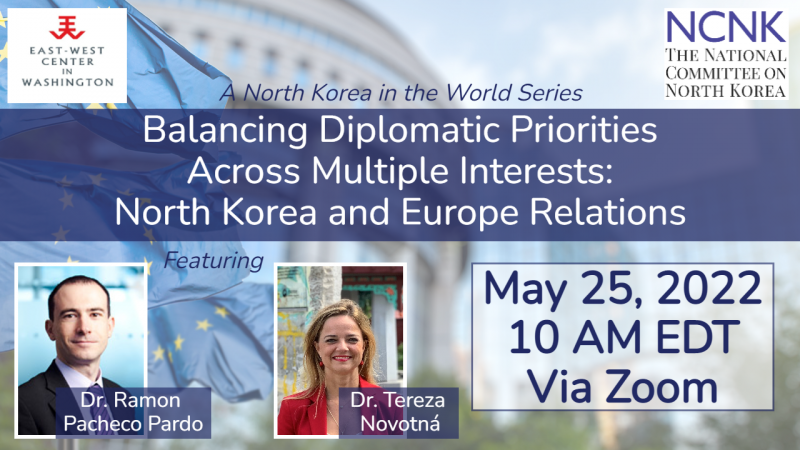 The East-West Center in Washington and National Committee on North Korea
invite you to the following North Korea in the World Webinar Series:

Please join the National Committee on North Korea and the East-West Center in Washington for a North Korea in the World webinar on North Korea-Europe relations, featuring Dr. Ramon Pacheco Pardo and Dr. Tereza Novotná.

Europe represents a crossroads of relations with North Korea, especially as a continent of countries largely representative of Western liberal values. However, a supermajority of European Union and NATO states have diplomatic relations with North Korea, and at least eight EU and NATO countries host a North Korean embassy (six of which have their own embassies in Pyongyang). This webinar examines what drives relations between North Korea and European countries and takes a deeper dive into the balancing act those countries play while navigating their diplomatic ties with the United States and South Korea. 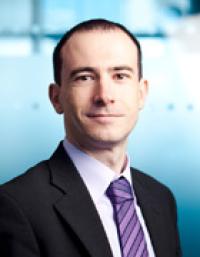 Ramon Pacheco Pardo is Professor of International Relations at King’s College London and the KF-VUB Korea Chair at the Brussels School of Governance of Vrije Universiteit Brussel. Prof Pacheco Pardo is also Adjunct Fellow (Non-Resident) with the Korea Chair at CSIS, Non-Resident Fellow with Sejong Institute, and Committee Member at CSCAP EU. He has held visiting positions at Korea University, the Lee Kuan Yew School of Public Policy, and Melbourne University. His publications include the books Shrimp to Whale: South Korea From the Forgotten War to K-Pop (Hurst and Oxford University Press, 2022) and North Korea-US Relations from Kim Jong Il to Kim Jong Un (Routledge, 2019). Prof Pacheco Pardo has been editor of Millennium: Journal of International Studies and currently sits in the editorial boards of East Asia: An International Quarterly, EU-China Observer and Global Studies Journal. He has participated in track 1.5 and 2 dialogues with South Korea, North Korea, China, and Japan. Prof Pacheco Pardo has testified before the European Parliament and advised the OECD, the European External Action Service, the South Korean Ministry of Foreign Affairs, and the United Kingdom’s Cabinet and Foreign & Commonwealth offices. He is a frequent media commentator on Northeast Asian affairs and EU-East Asia relations.

Tereza Novotná is a Senior Associate Research Fellow at the EUROPEUM and Marie Sklodowska-Curie Fellow at the Center for European Integration at Free University Berlin where she works on her two-year “EUSKOR” research project (Horizon 2020 grant agreement No 797977) about the role of the EU in the North Korean crisis and in North East Asia. She also collaborates with the Institute for European Studies, Université libre de Bruxelles where she held two post-doc positions from 2012 to 2017. In 2017-2018, Tereza was a Korea Foundation Visiting Professor at the EU Center at Seoul National University and a Fudan Fellow at Fudan University in Shanghai. Tereza received her Ph.D. in Politics and European Studies from Boston University in 2012 and other degrees from Charles University Prague. Before completing her doctorate, she has held various visiting fellowships at SAIS Center for Transatlantic Relations in Washington DC, Harvard’s Center for European Studies, University of Birmingham, Stiftung Wissenschaft und Politik Brussels, DGAP Berlin (supported by a DAAD grant), IWM in Vienna and the Max-Planck in Cologne. Tereza is the author of the monograph How Germany Unified and the EU Enlarged: Negotiating the Accession through Transplantation and Adaptation (Palgrave Macmillan, 2015) and a co-editor of The Politics of Transatlantic Trade Negotiations: TTIP in a Globalized World (Ashgate, 2015). Her other research has been published in, among others, Journal of Common Market Studies, Studia Diplomatica, German Politics and Society, West European Politics, and Journal for ContemporaryEuropean Research as well as numerous policy and media outlets, including Washington Post, EurActiv, EU Observer, The Conversation, FEPS, ISPI Milan, LSE IDEAS EUROPP blog, Lidové noviny and others. She has also practical experience from working for the European Commission, DG RELEX/EEAS, the EU Delegation in Washington, DC and the Czech Permanent Representation to the EU.

Ross Tokola is the Executive Associate to the Director at the East-West Center in Washington. Mr. Tokola gives advice and support to the Director on ongoing near-term and long-term strategic projects and programs, and helps monitor progress and ensure effective coordination with East-West Center in Washington staff and stakeholders. Previously, Mr. Tokola was a Program Officer at the Asan Institute for Policy Studies during his five years in Seoul, and worked for the U.S. embassies both in the Republic of Korea and in the United Kingdom. In addition to studying the Korean language at Sogang University in Seoul, he holds a first class honors B.A. and M.A. in Philosophy from Heythrop College, University of London, and an M.Phil. in International Relations from the University of Cambridge.

Keith Luse is the Executive Director of the National Committee on North Korea. Previously, Luse was the Senior East Asia Policy Advisor for Chairman and later Ranking Member Senator Richard G. Lugar at the U.S. Senate Foreign Relations Committee from 2003 until 2013. Luse also served as Staff Director for Mr. Lugar at the Senate Agriculture Committee from 1999 through 2002, where the Senator also served as Chairman and later Ranking Member. While at the Senate Agriculture Committee, Luse made the first of eventually five trips to North Korea. Luse’s Bachelor of Arts degree in political science is from Indiana University. His graduate certificate in public management and additional graduate studies were obtained at Indiana University – Purdue University, Indianapolis.