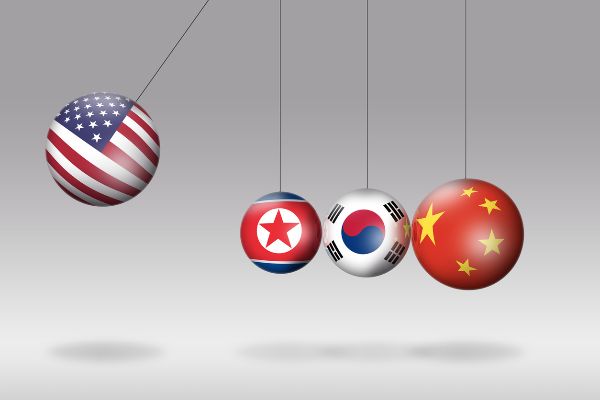 The past several years have seen growing Chinese assertiveness abroad and authoritarianism at home, as well as bipartisan sentiment in Washington favoring tougher U.S. policies toward China. In one form or another, deepening strategic competition between Washington and Beijing is likely to shape the geopolitics of East Asia - and the world - even after the Covid crisis abates and regardless of the U.S. election outcome this November. The direction of the U.S.-China relationship has deep implications for the future of the Korean Peninsula, from international efforts to address Pyongyang's nuclear program to the evolution of the U.S.-ROK alliance.

Please join the National Committee on North Korea for a webinar discussion of what intensifying U.S.-China strategic competition means for the Korean Peninsula, featuring analysis by Amb. Chun Yung-woo, the former ROK National Security Advisor; and Yun Sun, Senior Fellow and Co-Director of the East Asia Program and Director of the China Program at the Stimson Center. Scott Snyder, Director of the Program on U.S.-Korea Relations at the Council on Foreign Relations, will serve as discussant and moderator for the conversation. Our expert panel will examine how the re-emergence of great power competition may shape U.S. and Chinese interests on the Peninsula, as well as the strategic environment and available policy options for Seoul and Pyongyang.

Ambassador Chun Yung-woo served the Republic of Korea in many diplomatic functions during his 36-year career, including as the head of the South Korean delegation for the Six Party Talks on the North Korean nuclear program from 2006-08, as Vice Foreign Minister from 2009-2010, and as the national security advisor to President Lee Myung-Bak from 2010 until his retirement in February 2013. Amb. Chun currently heads the Korean Peninsula Future Forum, a think tank focusing on strategies for positive changes in North Korea, where he works on an array of issues including nuclear non-proliferation and Korean reunification. He graduated from Pusan National University with a B.A. in French and holds a master’s of international affairs from Columbia University School of International and Public Affairs.

Yun Sun is a Senior Fellow and Co-Director of the East Asia Program and Director of the China Program at the Stimson Center. Her expertise is in Chinese foreign policy, U.S.-China relations and China’s relations with neighboring countries and authoritarian regimes. From 2011 to early 2014, she was a Visiting Fellow at the Brookings Institution, jointly appointed by the Foreign Policy Program and the Global Development Program, where she focused on Chinese national security decision-making processes and China-Africa relations. From 2008 to 2011, Yun was the China Analyst for the International Crisis Group based in Beijing, specializing on China’s foreign policy towards conflict countries and the developing world. Prior to ICG, she worked on U.S.-Asia relations in Washington, DC for five years. Yun earned her master’s degree in international policy and practice from George Washington University, as well as an MA in Asia Pacific studies and a BA in international relations from Foreign Affairs College in Beijing.

Scott Snyder is senior fellow for Korea studies and director of the program on U.S.-Korea policy at the Council on Foreign Relations (CFR), where he had served as an adjunct fellow from 2008 to 2011. Prior to joining CFR, Snyder was a senior associate in the international relations program of The Asia Foundation, where he founded and directed the Center for U.S.-Korea Policy and served as The Asia Foundation's representative in Korea (2000-2004). He also serves as co-chair of NCNK's Advisory Committee. Mr. Snyder received a BA from Rice University and an MA from the regional studies East Asia program at Harvard University and was a Thomas G. Watson fellow at Yonsei University in South Korea.