Engaging North Korea – One Roundhouse Kick at a Time 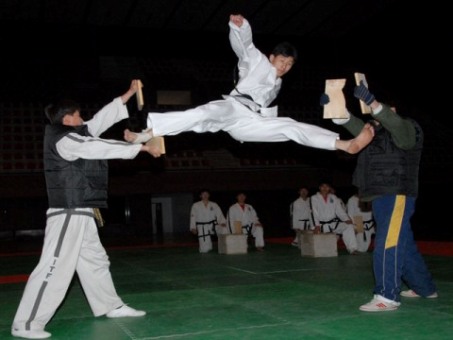 Members of North Korea's ITF team at a demonstration during a 2007 tour of the United States.

Stories on North Korea are often dominated by alarming headlines on its advancing nuclear or missile programs. However, there are also untold stories of quiet diplomacy and enduring engagement occurring between the people of the United States and North Korea that have been laying groundwork for a path towards peace and conflict resolution on the Korean Peninsula. 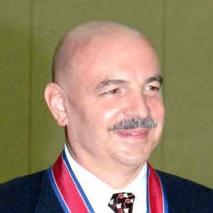 Few subjects have come to represent Korea in people’s minds as much as Taekwon-Do.  The export of Taekwon-Do from its roots in post-war South Korea to the world (including the United States and North Korea) is considered by some to be the original Korean Wave, according to NCNK member George Vitale, a long-time Taekwon-Do student, teacher, and leader. Vitale has played a critical part in helping to introduce the teaching and promotion of Taekwon-Do in North Korea, including leading teams to North Korea for further training and exchange.

Vitale reports that Taekwon-Do was first created in South Korea in 1955 by a South Korean army general named Choi Hong-hi. In the nascent days of the establishment of an independent South Korea, the Rhee Syngman government began several campaigns to “reinvigorate Korean pride, restore aspects of culture, and teach history.” With approval from President Rhee, General Choi began moving from the Japanese Karate he learned in Japan during the occupation, to developing a new and uniquely Korean martial art, which was then named “Taekwon-Do.”

After being sent abroad as South Korea’s first Ambassador to Malaysia, General Choi returned to Seoul to find that civilian martial art leaders in favor of a more “sport focused” version called “Tae Soo Do” had rejected his original Taekwon-Do style. General Choi successfully lobbied martial arts leaders to re-adopt the name of Taekwon-Do, but the focus on a “sport” approach was not easily changed. General Choi later departed Korea fearing for his safety as a critic of the military rule and moved his Taekwon-Do organization, the International Taekwon-Do Federation (ITF) to Canada. After he left Seoul, South Korea established the World Taekwondo Federation (WTF) to govern Taekwondo teachings across the country and later it became the regulatory body for Olympic sport status.

In 1980, General Choi embarked on a trip to Pyongyang with his 7th ITF Demonstration Team to introduce Taekwon-Do to North Korea. Nine years later, Choi asked Vitale to lead a team to the North.

Vitale first began learning and studying Taekwon-Do in 1974 as a young man in New York City. He continued to practice Taekwon-Do and volunteered with the ITF as a leader throughout his 24-year career with the New York State Police. Since his retirement from his law enforcement service, he has taken a much more active role in the ITF’s international exchanges and has been traveling the world to help promote Taekwon-Do -- particularly in relation to North Korea. He has been deeply involved with using Taekwon-Do as a soft diplomatic tool to help foster better relations between the United States, North Korea, and South Korea.

As his rank increased within the ITF leadership, Vitale continued to build relations with his North Korean counterparts, the Chosun National ITF. He, along with Grandmaster Jung Woo-Jin and other American martial artists, successfully helped arrange for the Chosun National ITF Taekwon-Do Team to tour the United States in 2007 and 2011, travelling to Atlanta, Boston, Cedar Rapids Iowa, Los Angeles, Louisville Kentucky, New York City, Philadelphia and San Francisco for cultural exchange. He hopes to arrange a third US tour this year or next. In the past, the Chosun National Team taught American students at public and private schools as well as outdoor parks open to the public.

Vitale was recently involved in helping the ITF’s International Demonstration Team, made up of performers from the North, participate in the World Taekwondo Federation’s World Championships in Muju, South Korea in June 2017. The team’s participation and visit to South Korea was notable not only because it was the first time in 10 years that performers from North Korea had visited, but also because it coincided with the inauguration of President Moon Jae-in who has repeatedly called for more exchange with North Korea. President Moon attended the opening ceremony and greeted each team member personally. The Championships ended with the South Korean and North Korean teams performing demonstrations in the closing ceremony as well, with the International Olympic Committee (IOC) President Dr. Thomas Bach in attendance.  Pending approval by the State Department, Vitale will travel to Pyongyang in September for the ITF’s 20th World Taekwon-Do Championship.