On September 3, North Korea conducted its sixth nuclear test, with DPRK state media announcing soon afterward that the country had successfully tested a "two-stage thermo-nuclear weapon" capable of being fitted to an ICBM. Initial estimates of seismic activity triggered by the test ranged from a magnitude of 6.0 (according to the CTBTO) to magnitude 6.3 (U.S. Geological Survey), indicating the yield of the test device to have been over 100 kilotons - far larger than the yield of the North's previous tests. The test was preceded by a KCNA report on Kim Jong Un personally examining the new device, which featured a two-chambered, peanut-shaped design. 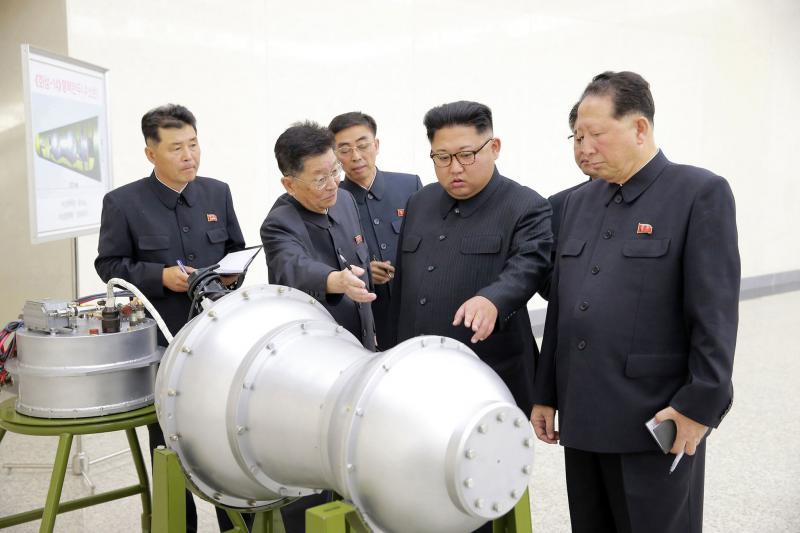 North Korea has been signalling its intent to develop thermonuclear weapons for several years. In 2010, the country announced that it had made a breakthrough in nuclear fusion technology. Subsequent satellite imagery analysis uncovered the production of lithium-6 and tritium, isotopes critical to the production of thermonuclear weapons, at North Korea's Hungnam Chemical Complex and Yongbyon nuclear site, respectively. North Korea claimed that its fourth nuclear test, conducted in January 2016, involved a thermonuclear device, although the yield of that test was too low to be consistent with a successful two-stage thermonuclear weapons; some experts speculated, however, that this earlier test may have involved a "boosted fission" device, marking an intermediate step toward the development of a hydrogen bomb.

There is no immediate evidence that the compact two-stage device showcased by KCNA had the same design as the device actually tested on Sunday; the explosive yield of that test could have been consistent with a more powerful boosted fission weapon or a layered thermonuclear design, and the tested device may not have been compact enough to be paired with a ballistic missile. Radionuclides released by the apparent collapse of the test site tunnel may provide more details about the technical specifics of the test.

In his initial response to the test, President Trump tweeted that North Korea "has become a great threat and embarrassment to China, which is trying its best to help but with little success", and attacked South Korea's support for engagement with the North, tweeting that Seoul's "talk of appeasement with North Korea will not work." The nuclear test also came shortly after reports emerged that Trump was preparing to withdraw the U.S. from its free trade agreement with the ROK, creating a new source of tension in the relationship.

At an emergency UN Security Council briefing on Sunday, U.S. Ambassador to the UN Nikki Haley said that North Korean leader Kim Jong Un was "begging for war," and called for "quickly enacting the strongest possible measures here in the UN Security Council." Haley also rejected the a "freeze-for-freeze" proposal, under which the U.S. and South Korea would halt joint military exercises in return for North Korea suspending nuclear and missile tests, and said that "the United States will look at every country that does business with North Korea as a country that is giving aid to their reckless and dangerous nuclear intentions." The latter point appeared to echo a tweet by President Trump saying that "the United States is considering, in addition to other options, stopping all trade with any country doing business with North Korea."

Secretary of Defense James Mattis also said in a press statement that "any threat to the United States or its territories, including Guam, or our allies, will be met with a massive military response."

Next Steps for South Korea and Japan

In responding to the test, South Korean President Moon Jae-in indicated his support for strengthened economic pressure against the North, calling for the UN Security Council to consider an oil embargo and to ban the import of North Korean laborers. In a phone call with President Trump, the two "agreed to maximize pressure on North Korea using all means at their disposal." Moon also took steps to clear the way for the full deployment of the Thaad missile defense system in South Korea, and reached agreement in principle with the U.S. to lift restrictions on payloads for South Korean missiles. ROK Defense Minister Song Young-moo, in a call with Secretary Mattis also reportedly requested that U.S. strategic military assets be rotated through South Korea more frequently; the two also reportedly discussed the prospect of a return of U.S. tactical nuclear weapons to the Korean Peninsula, though without committing to the idea.

Japanese Prime Minister Abe had two phone calls with President Trump over the weekend, both shortly before and shortly after North Korea's nuclear test. After the latter call, the two leaders condemned North Korea's nuclear test and reconfirmed their countries' "ironclad mutual defense commitments." Trump also indicated that he would take actions to allow Japan, as well as South Korea, to purchase sophisticated U.S. military equipment. Abe will also likely raise the issue of new UN sanctions against North Korea when he meets Russian President Vladimir Putin at an economic summit in Vladivostok on Thursday.

Russia and China have both signalled wariness about signing on to a full-scale oil embargo against North Korea. President Putin told journalists that North Koreans would "eat grass but would not stop their program as long as they do not feel safe," calling for "peaceful dialogue" and saying that sanctions were useless and ineffective. Statement's from China's Foreign Ministry have been more circumspect, condeming the test, reiterating the "freeze-for-freeze" proposal, and arguing that "sanctions alone will never be a way out." Analysts have noted that the North Korean nuclear test comes at a sensitive time for China, which supplies North Korea with the majority of its crude oil via a pipeline or tanker: the test came as China hosted a BRICS summit of major emerging economies, and comes a month before the Communist Party of China's 19th Party Congress, a major domestic event which will reshape the makeup of China's top leadership.